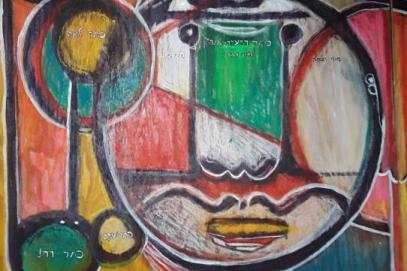 Art and Kabbalah Meet in Paintings by Sandra Valabregue

A collection of the latest work by Sandra Valabregue, a painter and independent scholar who specializes in medieval Kabbalah and philosophy, runs through June 2. This exhibition, called “Circles in the Tree,” shows her recent focus on Jewish topics such as Angels, Talisman, Hamsah and the sefirotic tree. Valabregue will present an artist’s talk on Saturday, May 18 at 12:45 pm; Sabbath rules will be observed.

Valabregue, who has lived mostly in Jerusalem for the last 20 years, has gathered the ancient Jewish iconography and reinterpreted it into a new iconography. “I gathered, from ancient manuscripts and early prints, images of angels, demons, kmeot (amulets), ilanot (trees), and hamsot,” she explains. “The idea is to create new icons from ancient ones, to revive them and give them new form. In a way it is a cultural process where ancient forms are reborn into new ones.” She calls this project “Partzufim and Ilanot” (divine faces and trees).

Her inspiration is from the “ilaney sefirot”, a visual tradition that was vibrant up to the 19th century. While ten sefirot, which represent in Kabbalah the attributes of God, have been the subject of visual representation as diagrams in the form of a faces and trees, her paintings play on this ancient iconography to revivify archaic forms of knowledge. “Body mapping the divine presents in a very audacious form of representation, both extremely figurative and abstract, meant to activate and nourish the imagination,” Valabregue explains.

“Art and Kabbalah meet in my work first with the dimensions of depth that is so intrinsic to the mystical approach,” she says. “Depth is how secrets are concealed and conveyed; it is about the capacity of the eye to make its way through opacity and details: simplicity through complexity, the part in the whole, the whole into parts. In our modest human world, limitation is where life can take form, and, within the parameters of form, to reach something else, more infinite.”

Born in France, Valabregue obtained her M.A. in Philosophy from the Sorbonne, an M.A. in art from the Beaux Arts de Paris, and a PhD in Jewish Thought from Hebrew University. Currently a visiting scholar at Yale University, she has taught at Yale, UCLA, Queens College, Columbia University, and institutions in Israel. She has exhibited her work in France, Israel and the US, including at BEKI in 2011.