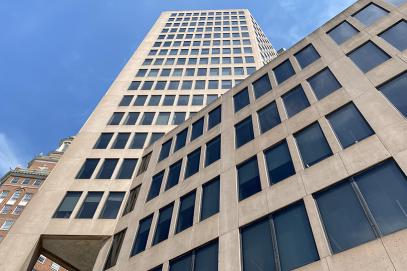 Today preservationists seek to honor and save seemingly impersonal and stark modernist buildings of the 1970s whose construction was often a bête noire of their preservationist predecessors. Buildings such as the New Haven Savings Bank (1972), shown here, or the New Haven County Courthouse (1971) present us with much to admire and ponder — they may seem formal and simple, but as we take in their cutouts and windows, ornaments and patterns appear.

Join New Haven Preservation Trust for this self-guided online tour and explore the meaningful character of a style in flux, as the exaggerated simple forms of late modernism encountered the extravagant, exaggerated, and even humorous, neoclassicism deployed by Postmodernism. Either online or in person (if you choose to go on your own), on this tour you will encounter remarkable examples of this age-defining architecture that are hosted by the city of New Haven. Link for the online tour will go live on October 10.