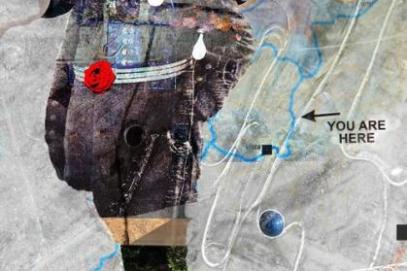 Highlighting the futile quest of humankind to create permanence, Mark St. Mary reminds us that “objects, no matter how massive or solid, will deteriorate” over time. Unless, of course, “man takes on the Sisyphean task of trying to preserve them.” Interested not in what objects were, but rather, what they have become, St. Mary becomes a kind of preservationist. In this collection of abstract photographic images titled Static, St. Mary captures the “beauty of deterioration,” preserving a moment in time during the evolution of found objects.

Simultaneously, Brian Flinn plays with found objects and images and notions of order and disorder in his collection of mixed-media artworks titled, Permutations. Of the digital works and drawings, Flinn states: “They serve as reminders of the ease with which we can be overwhelmed or paralyzed by minutiae, but that we have the choice to embrace alternatives. Like any collection of elements in the universe, we are the arranged and the arrangers, the permutations of events and experiences that provide us a rich and complex life.”

Brian Flinn is an artist whose current work uses both digital and mixed media. He earned his BFA in Illustration in 1990 from the University of Bridgeport and his MFA from the School of Visual Arts in 1993. In November 2018 an exhibition of his recent work was held at Partium Christian University in Romania titled “Loss: Form, Texture and Symbolism.” He has shown in galleries throughout the U.S. including: The Los Angeles Center for Digital Art, Sacramento Fine Arts Center, Verum Ultimum in Portland, OR and Gallery 66 in NY. His work has been shown widely in Connecticut at a range of venues including: The New Britain Museum of American Art, CT Academy of Fine Arts, the University of Bridgeport and Central Connecticut State Universitywhere he works as Associate Professor of Art teaching digital art, painting and art education.