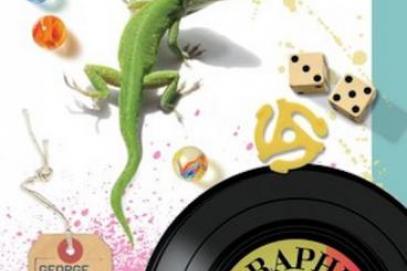 Over the last forty years, George Corsillo has produced some exciting, and often iconic art. You have seen his graphic design on album covers, posters, and tour merchandise for John Mellencamp and Luther Vandross; on book covers for Carrie Fisher’s memoir Postcards from the Edge, Larry McMurtry’s Lonesome Dove, and Bret Easton Ellis’s Less Than Zero; on numerous projects for Garry Trudeau and Doonesbury. Corsillo has also worked with Yoko Ono, the Eagles, and Pat Benatar. He did the album cover for the original soundtrack from the motion picture Grease. He designed the book cover for First Wives Club. From albums by Jefferson Starship and Dolly Parton to the packaging of New Haven’s newest hip brew-pub, Corsillo’s work is everywhere.

You’ve seen George’s work. Now you can see the best of his work in one place.

The new retrospective More is More not only guides visitors on Corsillo’s personal journey, but also provides a glimpse into the development of the graphic design styles of the 80s and 90s. In the early days, Corsillo assembled designs with mechanical paste-ups, cutting and pasting to create press-ready art. Today, as one might expect, his work is all computer-based. His early work, in the forefront of Postmodern and New Wave design, helped transform the graphic design field. Appropriating pop-art imagery and modernist collage techniques, and using an irreverent approach to type and a shocking color palette, the end product became a rock-and-roll/punk style with a twist.  “More than anyone else,” Garry Trudeau says,

“[George] makes me look more talented than I am, for which I am usually privately grateful.” Now, that private gratitude will become public, for all of us.

George Corsillo is the co-owner and art director of Design Monsters, a design studio in Westville Village, New Haven, CT. George studied Graphic Design at Pratt Institute in Brooklyn NY where he earned his BFA. His first job out of Pratt was at Warner Paperback Library. From there he moved to Paul Bacon Studio where he was exposed to all of the major New York publishing houses. He had been Paul’s assistant for three years when he moved to Los Angeles to work for Gribbitt! Design Studio. At Gribbitt! he worked with major record labels (RCA, Casablanca, Soul Train, Columbia, etc.) designing album packages such as Grease, The Original Movie Soundtrack. After moving back to the New York area, George started Design Monsters, designing book jackets and interiors –– Less Than Zero by Brett Easton Ellis; Famous for 15 Minutes, a biography of Andy Warhol by Ultra Violet, Lonesome Dove, the Pulitzer Prize-winning novel by Larry McMurtry (as well as the logo and title graphics for the TV mini-series.) Album package clients included: Jefferson Starship, Dolly Parton, Yoko Ono, Pat Benatar, and Bon Jovi. Luther Vandross and John Mellencamp were both musicians with whom he collaborated for many years, creating posters, tour merchandise, videos, etc. as well as designing over a dozen album covers for each of them. Since moving to New Haven, George has focused his career on posters, products, books and typography. Currently, he is the graphic designer for Garry Trudeau’s, Doonesbury – he colors the Sunday comic each week – designing his books and posters. He has also had the opportunity to design three exhibition books – War Games; History; and War, Myth, Desire – for internationally renowned photographer David Levinthal.