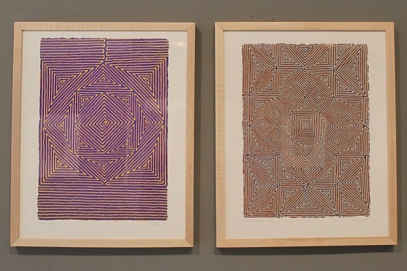 The lines are so close together and so meticulously drawn that they buzz by proximity to one another. The effect is disorienting, like an optical illusion, a trick, a puzzle. It gets that much more intense when you see that New Haven-based artist Daniel Eugene’s drawings can be interpreted as a maze — a series of patterns that invite you to take a closer look, and slowly but surely, have your vision rearranged just a little. “Seduced By The Minotaur” — Eugene’s latest art show, running at Da Silva Gallery until Feb. 29, with an opening reception on Feb. 15 at 5 p.m. — aims to do something like that. “I am fascinated by the optical phenomena that result from line geometry and pattern,” Eugene writes in an accompanying artist statement. “As I experiment with the variety of ways to employ this spectacle of two-dimensional depth my interest continues to be how the visual effect impacts state of mind; how it encourages imagination and forces reverie. I am further interested in how surrendering to the imperfection of a hand-drawn rendering increases the activity of line, the vibration of pattern, and correspondingly, the psychic and psychological reflex of the viewer.”