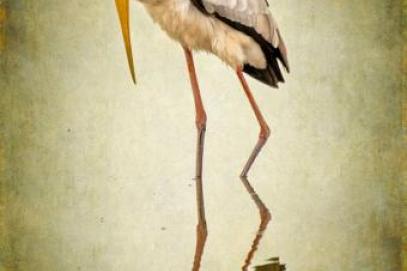 Kehler Liddell Gallery presents: VANISHING: VOLUME TWO, by Penrhyn and Rod Cook. An artist talk will be held on Sunday, February 24th @ 3pm, with reception to follow until 6pm. ABOUT THE SHOW: During their first journey to Kenya and Tanzania three years ago, husband and wife photographers, Penrhyn and Rod Cook, were struck by the majestic beauty of the African wildlife, as well as the intense sadness they felt for the tragic fate facing the creatures: “African wildlife is vanishing. The reasons are numerous and manifesting themselves as if they were choreographed to occur in unison. … We are not experts on the incredibly complex issues that threaten the region ... We can only attempt to visually represent what we saw and how we felt about it.” The collection debuted at KLG in September 2017, and then later traveled to the New York Hall of Sciences, and other local venues. Anxious to continue their investigations, the couple returned to Kenya this past year with the specific intention of documenting the Great Migration of over 1.5 million wildebeest across the East African plains. Unfortunately, unusual weather patterns kept many of the animals in Tanzania, where grass was still plentiful; a direct result of climate change: “Scientists predict that in 50 years time, if we don’t spend more time thinking and acting differently in regards to conversation, species we know and love will be driven to extinction … humans could very well be one of those beloved species.” Working to the undertones of climate crisis, the couple ultimately discovered new photographic opportunities in “the relatively untouched golden grasslands of Kenya.” Vanishing Volume Two presents a further celebration of “the magnificent animals still to be found in Africa.” While the original collection was composed of all sepia-toned images, the images in Volume Two include components of color.

ABOUT THE ARTISTS: ROD COOK worked as a commercial photographer in New York for the first 25 years of his career. His fine art career began in 1996 with “Cypress Knees and Tupelos,” nudes taken in cypress swamps in and around Savannah, Georgia. Since then he has created his own interpretations of botanicals, landscapes, masks, mannequins and statues, often incorporating other mediums into the photographs.

Penrhyn Cook says: “A black and white photographic workshop 20 years ago opened my eyes to photography and life changed for me. Photography became a personal search for my own vision of the world. … I started with film, but now work digitally.” For more information about the artists, please visit: www.penrodphotographs.com.

Artist talk is sponsored by ArtEcon Initiative and made possible with support from the Department of Economic and Community Development, CT Office of the Arts, which also receives support from the National Endowment for the Arts, a federal agency.