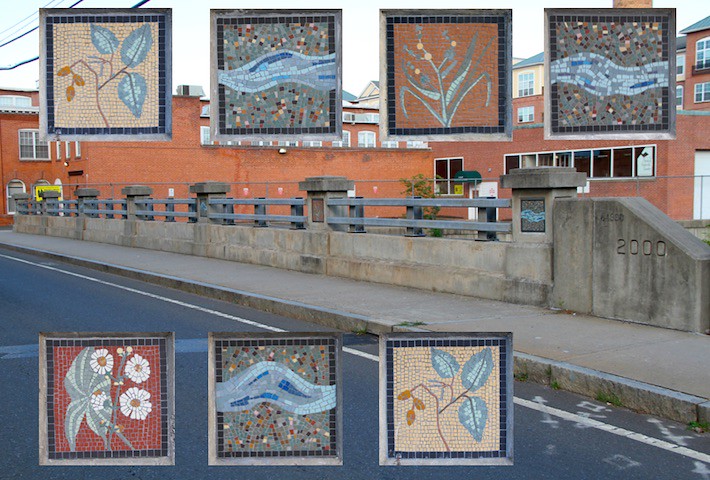 As you travel across the Blake Street Bridge in Westville, stop and consider the mosaic panels installed on the columns on both sides of the bridge. The mosaics are a reflection and a reminder of the water and wildlife of the West River watershed below.

Three of the panels on the west side of the bridge represent botanical illustrations of non-invasive native species:

• Broadleaf Arrowhead, or Sagittaria latifolia, is an aquatic plant that grows in shallow wetlands and has white arrowhead-shaped leaves.

• American Bur-reed, or Sparganium americanum, which looks somewhat like a grass, is an important conservation plant because of its ability to remove excessive nitrogen and phosphorus from wetlands.

• Speckled Alder, or Alnus incana, is a common wetlands tree that grows rapidly and is often used to help rehabilitate and enrich surrounding soil.

Four of the panels on the east side of the bridge represent illustrations of common animals found in the West River:

• Green Frog, or Lithobates clamitans, is a small frog common in Connecticut. It has green, brownish or bronzy skin with mottling on top.  Adult green frogs hunt bugs by shooting out their sticky tongue to trap the insect.

• Red Winged Black Bird, or Agelaius phoeniceus, is found in most of North and Central America. The male bird is black with a red shoulder and yellow wing bar, while the female is a plain dark brown.

• Shad, or Alosa sapidissima, is Shad are also valued as a sport fish. It

spends most of its life in the Atlantic Ocean, but swims up fresh rivers to spawn.

The remaining panels on both sides of the bridge represent the West River which runs beneath the bridge.