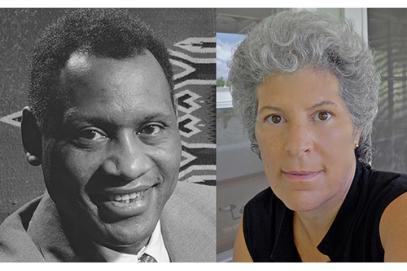 A Black History Month Celebration: Commemorating the Life, The Deeds, and the Times of Paul Robeson

Join Susan Robeson, granddaughter of Paul Robeson, as she commemorates the life and contributions of Mr. Robeson, a distinguished scholar, athlete, actor, and singer who left a legacy of global activism for civil rights and social justice. Ms. Robeson will share her story, discuss what it means to be a global citizen, and offer solutions to some of the challenges we face today. This event is free and open to the public.

Susan Robeson grew up in West Harlem. As executive producer of the PBS station in Minneapolis/St. Paul, Susan Robeson managed a documentary unit and a second channel, which she transformed into a model for community empowerment and development. Robeson worked extensively with street gangs around the nation documenting efforts to organize peace treaties and spent time in post-apartheid South Africa training township activists in broadcast-quality video production. She also designed a nationwide citizen journalism initiative for the President of Timor-Leste – Nobel Peace laureate Dr. Ramos-Horta – to help foster civic engagement and build democracy in this first new nation of the 21st century. Early in her career, Robeson co-founded Third World Newsreel, an independent film production and distribution collective and, for many years, produced Like It Is with Gil Noble on WABC-TV. Robeson resides in the New York City area where she is executive director of the Paul Robeson Foundation and manages the Robeson Family Trust.