June 12, 2015, The New Haven Independent, by Paul Bass - "The old-fashioned telephone poles and power lines are crisscrossing the landscape, but they are arrested in their headlong racing.

June 12, 2015, The New Haven Independent, by Paul Bass - "Nature erupted outside outside another New Haven school Friday, where fourth-graders Kamiyah Emery and Sasha Cohen Cox spread the word about the right time to taste the nectar from the honeysuckle they’re tending. Kamiyah and Sasha shared their wisdom at the opening of an urban wildlife habitat that opened outside Edgewood School. It was the second such habitat opening this week. 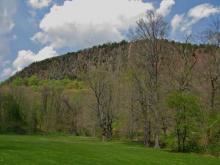 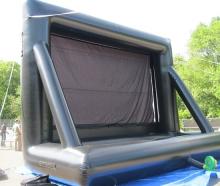 June 3, 2015, The New Haven Independent, by Freesia DeNaples - "A crew erected not a tent, but a huge inflatable movie screen in Edgewood Park—in preparation for a summer of “Friday Night Flicks” in parks across town. Martin Torresquintero, outdoor adventure coordinator for the Department of Parks, Recreation and Trees, directed the efforts of the seven-member crew Wednesday in the skating rink outside Edgewood’s Coogan Pavilion. As the screen slowly rose up into the air, one of the crew members noted little kids might want to jump on the base of the screen, which is almost identic

June 4, 2015, by David Sepulveda - "It was in the abandoned factories where the graffiti artist known as REO frequently went to ply his aerosol craft, and where he first encountered many of the found objects and elements that now comprise “Another Man’s Trash." That’s the title of REO’s debut, solo exhibit at Westville’s Keys on Kites Tattoo and Gallery at 869 Whalley Ave. REO’s graffiti pseudonym was given to him by his cousin and mentor, Seme, who early 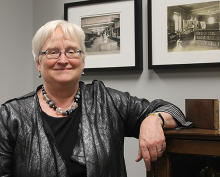 June 3, 2015, The New Haven Independent, by Stephanie Addenbrooke-"When lawmakers voted on New Haven’s new city budget, someone had reason to cheer: City Librarian Martha Brogan, whose team’s lobbying efforts-a mixture of social media and old-fashioned bring-out-supporters-in-person-led to the creation of four new full-time positions. It was the library system’s first budget increase after years of cutbacks.Brogan (pictured above) said the new four positions will

CITY, DEVELOPER FACE OFF OVER CVS

May 29, 2015, The New Haven Independent, by Markeshia Ricks - “Do not smirk,” snapped the developer. “I sat here and respectfully listened to your presentation, Matt.” “I’m not smirking,” responded the city’s development chief. “Yes, you are.” “Look, this design is a generic unit B that I can find 800 times when I search Google images and it is an insult. I apologize for smirking, but somebody missed the boat here.” That kind of frank interaction usually takes place in private government offices.

Lyric Hall Parties With a Purpose

"Friends of Lyric Hall lifted their bid paddles and their forks to raise some cash for the restored century-old former Vaudeville theater. More than 150 people packed the hall for a benefit Thursday night that included a silent auction, live auction, food and music. The Westville cultural gathering place fell behind on property taxes."

The state rejected Roshan Patel’s efforts to sell booze in the Annex neighborhood, not because of all the complaints from neighbors—but because New Haven had reached a little-known state-calculated limit for the number of liquor stores allowed within its boundaries. Meanwhile, across town, a Westville Village landlord who beat Patel out for the last permit (by one day) has since seen her own plans dashed, and may end up opening her liquor store instead ... over in the Annex. The two neighborhood liquor-store dramas came to a head in recent weeks. 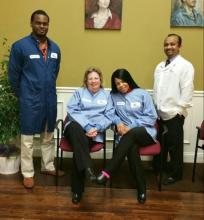 May 19, 2015 Dr. Stanley Jacobs of Westville Family Dental is your neighborhood dentist. WVRA sat down with Dr. Jacobs to talk about their mission to create a friendly, non-aggressive atmosphere for their practice by moving into an arts-oriented neighborhood, hanging local artists’ work, and engaging with the community.